Chlamydia is a type of bacteria called chlamydia trachomatis. It can infect the penis, vagina, cervix, anus, urethra, and eye. You might not be intimately familiar with the name, but chlamydia is actually the most commonly reported bacterial sexually transmitted disease (STD) in the U.S. Each year, about 1.5 million infections are reported to the Centers for Disease Control and Prevention (CDC). But because chlamydia often has no symptoms, at least as many people could be living with the disease without even realizing it. In fact, about 75% of infections in women and 50% in men are without symptoms. If you do not get treated for chlamydia, you run the risk of several health problems.

Unlike most other bacteria, chlamydia can't reproduce itself unless it gets inside human cells. The cells it likes the best are the type that line the urinary and genital tracts of both men and women. These cells, known as columnar epithelial cells, are supposed to keep germs out while allowing fluids to pass through. They are especially plentiful in the lining of the urethra and at the entrance to the cervix.

What problems can chlamydia cause in women?

If left untreated, chlamydia infection can cause pelvic inflammatory disease, which can lead to damage of the fallopian tubes (the tubes connecting the ovaries to the uterus) or even cause infertility (the inability to have children). Untreated chlamydia infection could also increase the risk of ectopic pregnancy (when the fertilized egg implants and develops outside the uterus.) Furthermore, chlamydia may cause premature births (giving birth too early) and the infection can be passed along from the mother to her child during childbirth, causing an eye infection, blindness, or pneumonia in the newborn.

The main complication that can result from untreated chlamydia infections is infertility in women. Usually in women, chlamydia infects the cervix, which is the opening to the uterus. But if it's not treated, it can travel up into the upper genital tract—the uterus, the fallopian tubes, the ovaries. And sometimes it causes a condition called pelvic inflammatory disease, or PID. That can be a painful condition where there's lower abdominal pain, pain during sex, and inflammation of the pelvic organs. If it gets up into the upper genital tract, it can cause scarring in the fallopian tubes, and that scarring can lead to the egg not being able to be fertilized properly or not being able to travel down the fallopian tube. Another complication that can come from the fallopian tubes being scarred or damaged from a chlamydia infection is called ectopic pregnancy, where the egg can actually get fertilized outside the uterus (for example, in the fallopian tube), and that can be life threatening. In pregnant women who have chlamydia or acquire chlamydia while they're pregnant, chlamydia can be passed to the infant during vaginal childbirth. In a newborn infant, chlamydia can cause eye infections (conjunctivitis) and it can also cause pneumonia.

What problems can chlamydia cause in men?

Usually men don't suffer any long-term consequences of a chlamydia infection. In a very small portion of men, the infection can travel into the upper genital tract and cause an infection of the epididymis (the tube where sperm collect). And that can cause pain and swelling. That's pretty uncommon, and it can be treated and it doesn't result in infertility in men.

If you think you are infected, avoid sexual contact and see a doctor. Any genital symptoms such as discharge or burning during urination or an unusual sore or rash should be a signal to stop having sex and to consult a doctor immediately. If you are told you have chlamydia or any other sexually transmitted disease and receive treatment, you should notify all of your recent sex partners so that they can see a doctor and be treated. Because chlamydia often occurs without symptoms, people who are infected may unknowingly infect their sex partners. Many doctors recommend that all persons who have more than one sex partner should be tested for chlamydia regularly, even in the absence of symptoms.

What Are The Symptoms of Chlamydia?

It is not easy to tell if you are infected with chlamydia since symptoms are not always apparent. But when they do occur, they are usually noticeable within one to three weeks of contact and can include the following:

Women may not notice the early symptoms of infection, but within five to 10 days of infection they may have bleeding between menstrual periods, painful urination or intercourse, vaginal bleeding after intercourse, low-grade fever, frequent urge to urinate, an inflamed cervix, abnormal vaginal discharge, and even a yellowish discharge from the cervix that may smell bad.

Since men more frequently get unmistakable early symptoms — a discharge from the penis, a burning sensation during urination, or swollen testicles — they are more likely to get treated.

Three out of four infected women — and one in two infected men — don't get early symptoms. But this doesn't mean it just goes away. Two of five infected women will go on to develop pelvic inflammatory disease, or PID. PID means infertility 20% of the time; debilitating chronic pelvic pain 18% of the time; and a life-threatening tubal pregnancy 9% of the time. It can make men sterile, too. And if a woman with chlamydia does become pregnant, she has up to a 50-50 chance of passing it on to her newborn child. Infants can die or become blind as a result.

How Is Chlamydia Diagnosed? 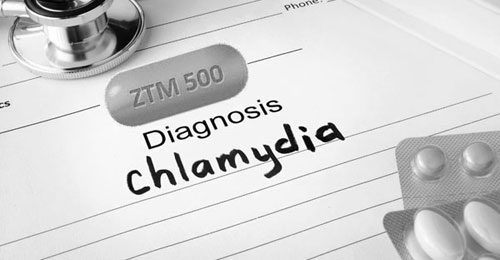 There are a few different tests your doctor can use to diagnose chlamydia. He or she will probably use a swab to take a sample from the urethra in men or from the cervix in women and then send the specimen to a laboratory to be analyzed. There are also other tests which check a urine sample for the presence of the bacteria.

What Are The Treatments For Chlamydia?

If you have chlamydia, your doctor will prescribe oral antibiotics, usually Azithromycin (Zithromax). Your doctor will also recommend your partner be treated to prevent reinfection and further spread of the disease. With treatment, the infection should clear up in about a week or two. It is important to finish all of your antibiotics even if you feel better. Women with severe chlamydia infection may require hospitalization, intravenous antibiotics (medicine given through a vein), and pain medicine. 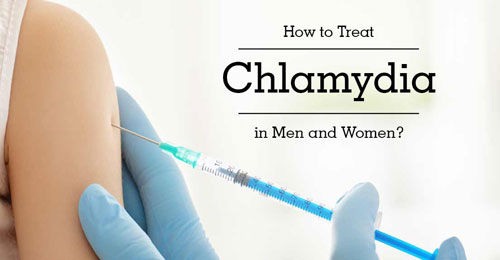 After taking antibiotics, people should be re-tested after three months to be sure the infection is cured. This is particularly important if you are unsure that your partner obtained treatment. But testing should still take place even if your partner has been treated. Do not have sex until you are sure both you and your partner no longer have the disease.

In most cases of chlamydia, the cure rate is 95%. However, because many women don't know they have the disease until it has caused serious complications such as pelvic inflammatory disease, sexually active women under age 25 and others at higher risk should be tested for chlamydia once a year during their annual pelvic exam even if they don’t have symptoms. Pregnant women should also be tested as part of their routine lab work.

Part of problem is there is such a reservoir of people out there carrying the infection and not knowing it. There are good therapies and in fact one medicine (Azithromycin) that is available. The problem is finding people who are at risk and convincing them that their lives — and those of their loved ones — are in danger. Who's at risk? The short answer is, all sexually active people. It is young, sexually active women aged 25 and younger who are most at risk. These women, the U.S. Preventive Services Task Force advised, should get chlamydia screening as a part of their routine healthcare. If you're a sexually active man, pay attention to your body. Get tested if you have any symptoms. If you're a sexually active woman 25 or younger, get tested every time you see the doctor.